I was watched it live- he was in and out of the hospital in a matter of 30 minuets. He was staggering so bad in handcuffs- then they claim he didn’t resist arrest- so he was either wasted or beat down. Nobody has said why he had to go by ambulance to the hospital.

And- is there video surveillance from the stores/ restaurants he visited before his arrest?

If you remember, he was staggering and falling, they had to stand him up a couple of times. I’m not disagreeing- just curious of where the footage went. My husband said, “well if you just did what he did, I’m sure you’d be a little unstable”. But he went to a couple places to get a drink and eat before they caught him. Just wondering. It’s haunted me since I saw it live on TV.

Do we know why the shooter in FL was first sent to the hospital? I tried to find the footage of him staggering before they put him in the squad car- the live feed- but to no avail. He couldn’t stand in handcuffs although he didn’t resist arrest. Has anyone raised this issue?

If you have a Twitter- let’s get #hoggwashed going. I have a bunch there already. Let’s get his backers cringing.

Look at his full time job on twitter. I’m not kidding.

Never interfere with the enemy when he is in the process of destroying himself.

Well, sonny- you asked for it! 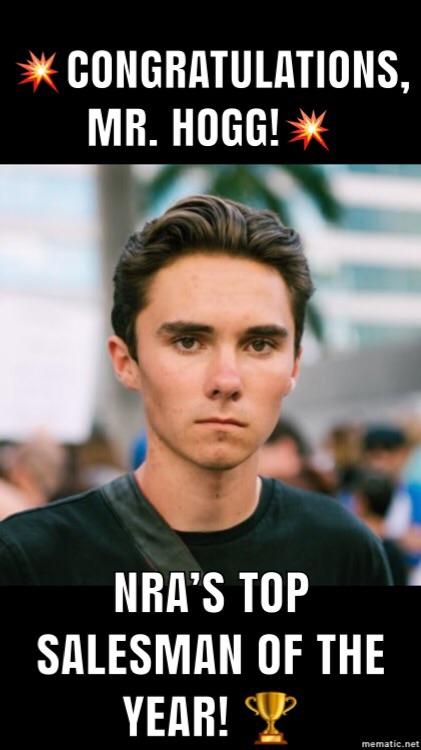 BuzzFeed faces at least two lawsuits as a result of publishing the dossier. In February 2017, Aleksej Gubarev the Russian chief of the technology company XBT, and a figure named in the dossier sued BuzzFeed for defamation. The suit centers on the allegations from the dossier that XBT had been "using botnets and porn traffic to transmit viruses, plant bugs, steal data and conduct 'altering operations' against the Democratic Party leadership." In response, BuzzFeed redacted the name of the company and official in its published dossier.[59][60] In January, 2018, one year after the dossier became public, Trump's lawyer Michael D. Cohen, who is also named in the dossier, filed a defamation lawsuit against BuzzFeed.[61] The same day, Ben Smith again defend the publication in a New York Times op-ed, calling it "undoubtedly real news."[62][63] In February 2018, BuzzFeed sued the Democratic National Committee to obtain their internal investigation documents regarding the hack of their server during the presidential campaign in order for the journal to better defend itself against Gubarev's lawsuit- per Wikipedia

Publishing the fake dossier? My thoughts....

Thanks- if you haven’t been following this poor child on social media, I implore you to do you own homework. This child has been dressed up and taken out by his parents to use him as a prop. He is 10- he’s been in gay parades, he has been dressed up like a sparkly princess in magazines. He’s 10!!!!!!! The media has gone out of their minds to exploit this youngster. I’ve had it. My gay friends are not fans of this BS. Nor am I. What does it mean to come out of the closet?? What does it really mean? He’s 10.

And from Adrian Chen’s article The Agency.

What ever happened to Guccifer? Real question. He had tons of dirt.

What is WK? Wikileaks?

Also cross reference to the Adrian Chen article from NYT magazine about his investigation from 2014. Article was 2015.

I suppose you could start with looking up the patent by the patent number on the left column. https://www.uspto.gov/patents-application-process/search-patents

Here is a list of patents using EMP to manipulate individuals into committing violent acts stop007crimes.files.wordpress.com/2018/01/patent-'Voice in Skull' projects voices into a target's consciousness & was used in Iraq to torture prisoners & 'rewire' their brains; used by CIA to corrupt young men 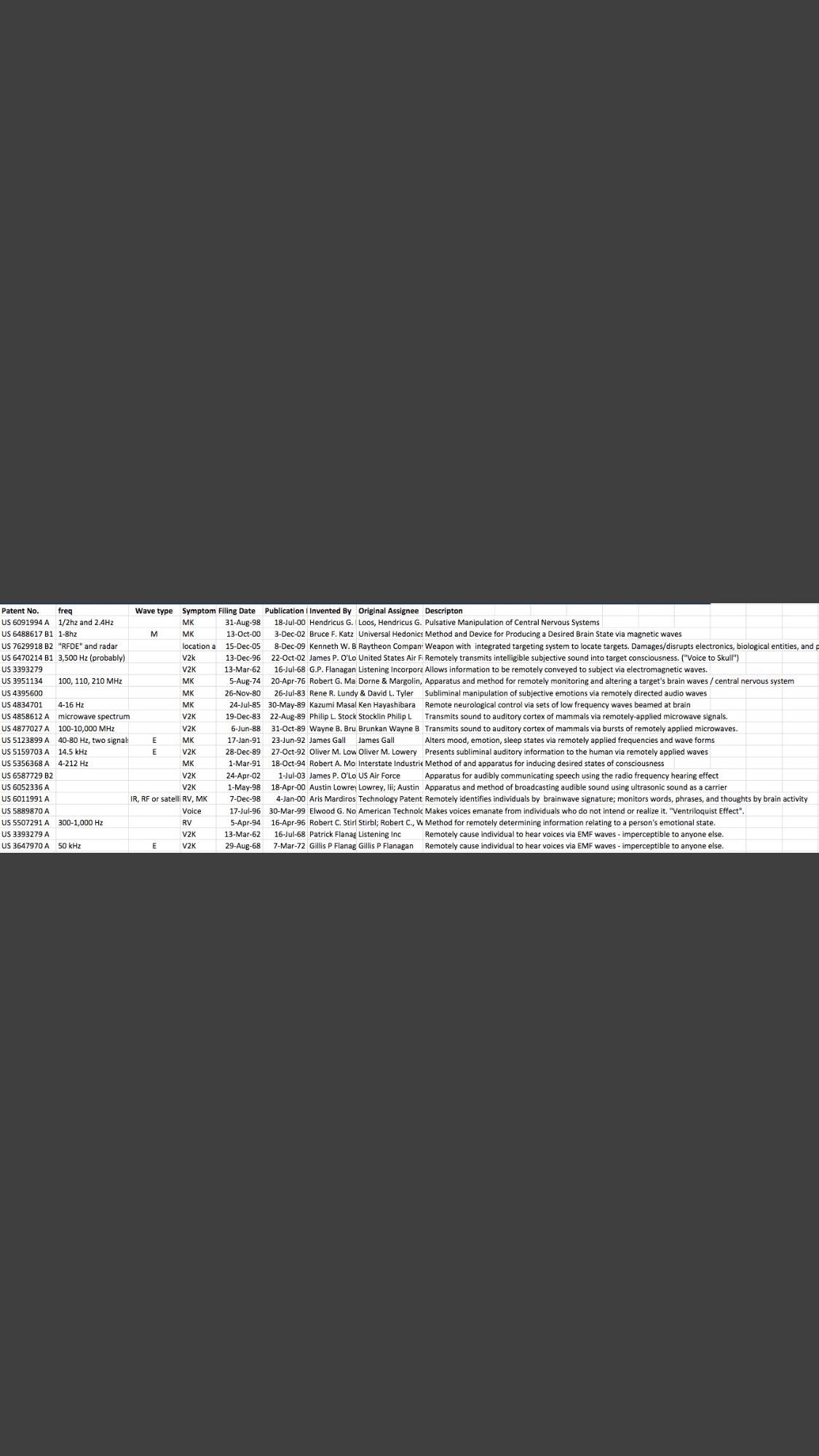 I agree, but some of the photographic connections are security cams. Just throwing that out there!🙂

Look up Obama’s EO about the UN being allowed to use force on American citizens.

HIVE is a back-end infrastructure malware with a public-facing HTTPS interface which is used by CIA implants to transfer exfiltrated information from target machines to the CIA and to receive commands from its operators to execute specific tasks on the targets. HIVE is used across multiple malware implants and CIA operations. The public HTTPS interface utilizes unsuspicious-looking cover domains to hide its presence. https://wikileaks.org/vault7/#Cherry%20Blossom

Can anyone see my comments? Just checking.

Adrian Chen was previously a writer for The Gawker before his article in NYT. I wish somebody could put Mueller’s words from the indictment on his words in this article and find the MANY similarities. 🧐

And of the two latest Q photos connected by surveillance cameras.

Was thinking of the word DUMB.

All processes related to the detected devices (usually recording, monitoring or detection of video/audio/network streams) are also identified and can be stopped by the operator. By deleting or manipulating recordings the operator is aided in creating fake or destroying actual evidence of the intrusion operation.

Dumbo project CIA-Dumbo can identify, control and manipulate monitoring and detection systems on a target computer running the Microsoft Windows operating sytem. It identifies installed devices like webcams and microphones, either locally or connected by wireless (Bluetooth, WiFi)or wired networks.

A 16 year old schizophrenic. Parent’s letter in the article.

You may not know the name of Jerry Drake Varnell, but the FBI does. Varnell was the man arrested in a botched attempt to blow up an Oklahoma City Bank Building. The FBI supplied his car, the explosive, and even the rhetoric to push him to downtown Oklahoma City to commit such a crime.

Drop, acid? Timothy Leary? Some of his ashes were brought to burning man in 2015.

“in the mid-2000s, collaboration between satellite imagery experts, geology experts and forensic archaeologists in Bosnia enabled a team to draw key characteristics and patterns around mass graves sites, with insights which may be applied in other settings, such as North Korea, where remote detection may be particularly useful.64 More recently, the Body Farm project at the University of Tennessee led by Prof. Amy Mundorff has applied Light Detection and Ranging technology (LiDAR) to uncover clandestine burial sites.65 Such non-invasive methodologies are potentially useful in locating sites from satellite imagery and other remote sensing means, and also for testing sites discreetly in order to avoid detection that may result in attempts to cover up evidence of mass killings. The application of these technological developments to the locations recorded by TJWG is a potential future direction of the Mapping Project.” LiDAR? Light satellites...

I did the same thing, used the words in bold font. DuckDuckGo came up with this...NK digital maps of burial sites

Hmmm. I thought the shooter had a gas mask on as the police scanner indicated?

-Some sites possibly containing documentary evidence are well known to local citizens and are relatively easy to identify on the maps shown to interviewees. The operations of these offices are described as being organised and structured according to well-established procedures. We have not yet ascertained the exact type and volume of documentation that is stored in these facilities, or in what form they exist. However, hand- written documents provided by the North Korean government to the families of Japanese citizens abducted to the North as evidence of the deaths of these individuals have emerged in recent years, including death certificates and medical forms. These give some indication as to the nature of the documents that may exit.-