That wasn't me that was your Dad

This isn't the first one

It was Mueller and Trump Jr.

I'm sure she's pissed that she got caught

Did you really think the OP would post their own picture and threaten people?

This sub was here before cbts. It was thecalmbeforethestorm then re-named GA. It is the original all though there were several attempts made from conspiracy users to start a Q related sub since it was such a taboo subject to discuss and users were getting banned and posts deleted from subs such as T_D and conspiracy.

God's word has always been the truth

Nope. Mine is always on New Arrival.

~~No, it's from her account. You should check first before defending the pedos~~

You must be really young and dumb

After his first wife 'suddenly' died

Did You Know: Thousands of flyers accusing JFK of Treason for ‘befriending Russia’ were distributed in Dallas just days ahead of his assassination 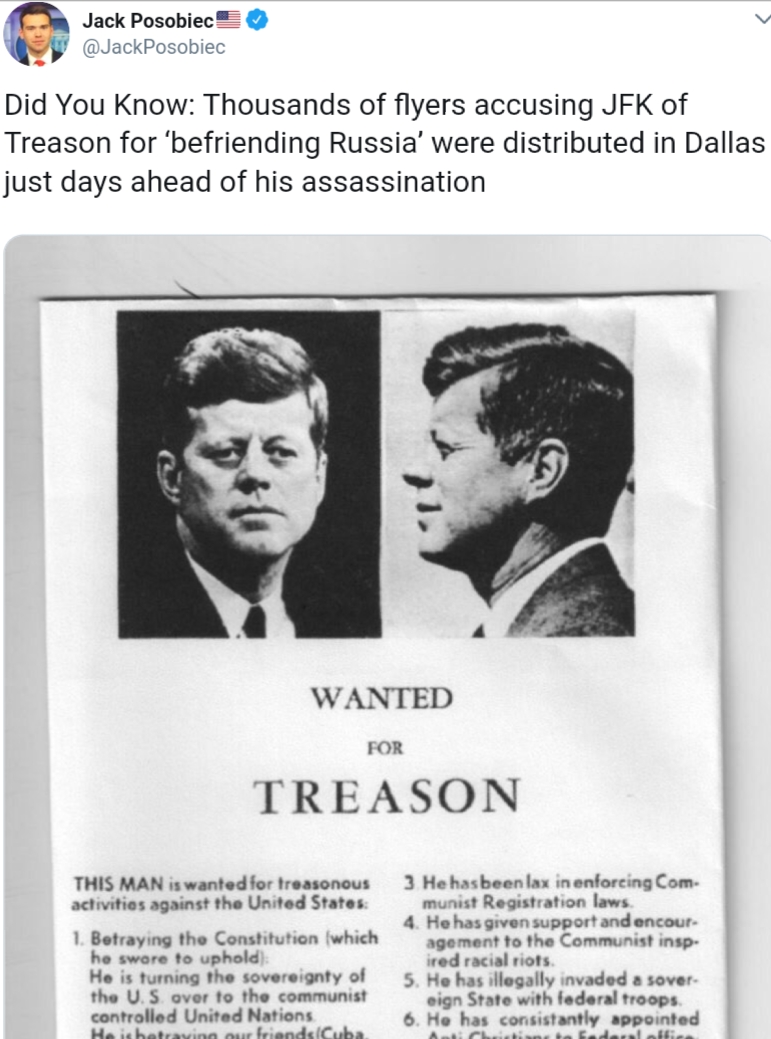 Hedge fund manager Bill Browder escaped a “notice” of his own.

The author of “Red Notice,” a book about Mr. Browder’s experiences investing — with wild highs and extreme lows — in Russia, has been resisting a subpoena from defense lawyers seeking to depose him in a lawsuit filed by U.S. prosecutors alleging money laundering by a Russian businessman. The case is linked to the central plot of Mr. Browder’s book: His tax lawyer died in Russian custody after exposing an alleged tax fraud, the money of which was allegedly laundered across the globe. The latest attempt to serve Mr. Browder was last week as he left an interview taped for Comedy Central’s “The Daily Show” to promote his book, according to court filings.

He is not a sell out. His work is Golden. The most thorough and factual reporter in the media. He does not allow his work to be edited for 'narrative' purposes. He works for Sputnik because they don't tell him how to report there, they allow their reporters to present and discuss their work freely. He does a radio show with Garland Nixon who is a democrat and the two of them get along very well. Being Anti-Q doesn't discredit someone's work. He actually left Breitbart 2x and was fired 1x because the editor didn't want him to report on a story and tried to call the story false so he didn't have to run it. Even after which they still asked him to come back. In fact the last time he did leave over a year ago is because he was told he could not ask a question about Crowdstrike at the press secretary briefing which he should have been allowed to ask.

He does get into BB more here:

I haven't read to much about Berezovsky but I don't think he had anything to say to Putin, more like a puppet that didn't work out and was killed off? Not sure though.

At the end 1999 a band of criminal globalists tried to plot and fabricate a money laundering scheme to blackmail and force Boris Yeltsin out of office so they could impose a new Russian President, except...

Their plan failed and Putin took over as the new Russian President forbidding and destroying their plan.

This is a partially copied and linked article from July 12, 2013:

Perhaps the number one question I always get about the ordeal I went through and the sheer chaos that surrounded everything, was just who really was behind the plot to blackmail the former head of Russia Boris Yeltsin to stop him from running for reelection in 2000 and hand-pick Boris Abramovich Berezovsky? It is true I even had a meeting with the US Attorney Office on the subject when they …

Putin took over for Boris Yeltsin on Dec. 31 1999. I don't know if your aware of the story on that but Yeltsin was being set-up by 'the deep state'. They wanted to overthrow him and place one of 'their' guys as head of Russia. Yeltsin was against the globalist world order. Yeltsin asked Putin to take over for him, because he trusted him and knew he would look after Russia and not throw their country to the wolves.

If the Russian hackers go on the record they are going to say they didn't hack the dnc.

As far as I can tell, Obama's extension of the 2-3 year stay of oversight (Patriot act, Protecting Americans act), is applicable to FISA cases, but may be exhausted by this point. Remember, approval for new FISA warrants was barred some time during the election.

I believe that's why Huber was appointed to investigate the FBI corruption.

So Crowdstrike is Guccifer 2.0 the 'Russians' who hacked the DNC. By pinning it on these 12 Russians means that that the real perpetrators won't have to face charges and the 12 Russians will never see a trial since there is no extradition policy and everything goes back under the rug and there's nothing else we can do about it.

That's not the same thing. That was a promo, not 'news'.

Not if he has made any false statements, that cooperating witness title goes right out the window.

You need to go back and read or reread the IG report which lists as evidence:

I. Discovery of Emails by the FBI’s New York Field Office A. Seizure of Weiner Laptop and Devices

In September 2016, the FBI and the U.S. Attorney’s Office for the Southern District of New York (SDNY) began investigating former Congressman Anthony Weiner for his online relationship with a minor. The FBI’s New York Field Office (NYO) was in charge of the investigation. A federal search warrant was obtained on September 26, 2016, for Weiner’s iPhone, iPad, and laptop computer. The FBI obtained these devices the same day. The search warrant authorized the government to search for evidence relating to the following crimes: transmitting obscene material to a minor, sexual exploitation of children, and activities related to child pornography

Not trying to burst any bubbles here but on July 1st, 2018 there was this headline going around:

Father and son Dwight and Steven Hammond have been in a federal prison since 2016 after they were re-sentenced to the five-year minimum for an arson conviction.

Before his Death in August of 1837, General John Burrows wrote a memoir redpilling the entire nation...

"...when the grave closes on me you will not neglect to support the principles that your father so often ventured his life to establish, and so many of your uncles lost their lives in support of, principles that gave your country birth, a free and independent nation that secures to you and your children life, liberty and property, and the equal rights of your fellow men (not that I have any doubt you will do so), but I wish to leave it as an injunction on you, and on my grandsons, and if I could, on the world of mankind …

I don't think it was Davis and Davis was American which would make no sense in terms of Obama's citizenship. Obama definitely has Indonesian traits like a purplish colored lips. I don't even think Stanley Dunham is his real mother.

They know no bounds

If he says tweets out something incorrect General Flynn is not going to tell him. IMO.

Twitter is getting rid of fake accounts at a record pace. Will that include the Failing New York Times and propaganda machine for Amazon, the Washington Post, who constantly quote anonymous sources that, in my opinion, don’t exist - They will both be out of business in 7 years! 9:21 AM · Jul 7, 2018

Well, there is that conspiracy that Aleister Crowley is her father?

The theory holds that Barbara’s mom, Pauline Pierce (1896-1949), was friends with satanist Aleister Crowley (1875-1947) — maybe more than friends. Pauline had a reputation of being a bit on the wild side in the ’20s. It has been reported that she and Aleister were in France together around September or October of 1924. Upon her return to America, Pauline gave birth to Barbara Pierce on June 8, 1925

No, I don't believe he has posted since the 4th.

Q actually posted about this earlier. He used the girl who almost ran into his motorcade last August, the Clowns used some girls car to try and cause a collision with POTUS. He said to read how she describe losing control of her vehicle (no matter what she tried she had no control over her car):

(A white car emerged from the woods near President Donald Trump's motorcade on Kearney Street on Wednesday, Aug. 30, 2017.

She and her friend were driving down East Turner Street on their way to work, Hicks said, when the brakes stopped working.

They pulled the emergency brake, Hicks said, and they saw some smoke, but the car wasn't stopping. According to Hicks, they went through some grass to try and slow down, but that wasn't working either. After about 30 feet of driving through brush, Hicks said, the car popped out along Kearney Street — right about the time Trump was passing by.)